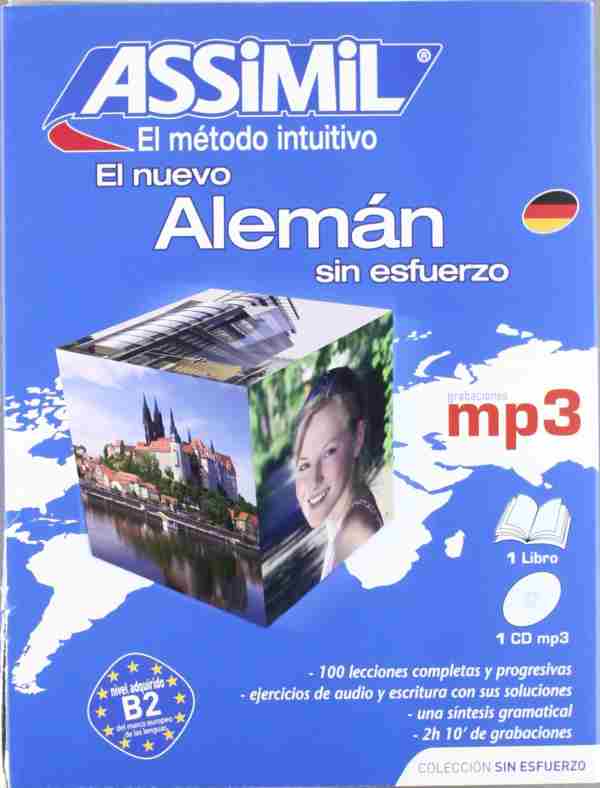 Dear linguophile friend, today it’s time to debate about one of the most popular methods to learn German: Assimil German With Ease. 🇩🇪

My experience with this language is one of a kind: even though I love it to death, I struggled for years in search of my way to learning German.

The modus operandi I found in schools and old-fashioned textbooks were of little help. 😓 As you can imagine, I stumbled upon Assimil German With ease – its old title – and once found it, I used it in my studying routine and eventually realized its pros and cons.

So for you, fellow lover of German uncertain whether to get Assimil German or not, I wrote this review, so that you can check if it’s suited to you: your way of learning, your current level, your interests, your goals. 🎓

Spoiler alert: to me, it has been very beneficial. Bear with me and in the lines below you’ll discover how. 😉

Assimil German: How did I find it?

I approached German because I wanted to translate Hegel’s works into Sanskrit.

Errr, I’m joking: I did it because it was the favourite language of a girl I liked in high school. 😂

I went to a semi-intensive course at a university, in years when German, in Italy, was a rara avis in the educational landscape. Imagine that it was already a miracle to find someone who could speak English…

That course introduced me to German: fine, but I didn’t go past A1.

Then I continued on my own, until the following ordinary course, four years later: another semi-intensive one, to supposedly reach an intermediate level. 📈

It was after entering B1 territory that my intolerance for the excesses of theory sprouted: more than a pet peeve, it would soon sweep through all my linguistic endeavours and reshape the way I learn languages. 😡

I don’t deny that such courses, apparently, were useful to some, however old-fashioned were they: however, the students benefitting from them were just a handful. In my opinion, too much effort for meagre results. 🤨

The majority of us students weren’t succeeding: endless hours of exercises in trennbare verben, demonstrative pronouns and cases.

What a drag: unable to tell any German tourist the most basic info, for we were bred to be skilled at dative and accusative exercises. No bridge was ever built toward communication. 🙄

My main point is: the formal study of grammar is certainly useful, in language learning; but not so early and so boringly. 🤨

Years later, a friend invited me to his house, and as I have a habit of rushing to the books on the shelves, I immediately noticed a pile of language self-teaching courses from the same publisher: Assimil.

At that point, I was more of a false beginner than a beginner beginner: anyway, I left my friend’s and went straight to get my first Assimil method. At that moment, I was learning French with an OCD-like devotion, but German would soon come.

When I started using it, I soon realized it was better than everything I had used that far. Why?

Well, if you want to deepen into the core principle of Assimil, stick around as I will write about it. For now, let me focus on Assimil German With Ease.

Assimil German: How is it organized?

There are 100 lessons unfolding along 581 pages: on top of those, some 120 extra pages provide explanations about alphabet, pronunciation, grammar.

So, although the book seems small, ouch, that’s an illusion: these are 700 pages of thick German content. 📚

Enclosed in this elegant pack there are four audio CDs: they are COMPULSORY. Listening, reading, repeating are of paramount relevance. 💿

Each lesson is a conversation or a short story: that is the point of departure of a full-fledged deductive lesson. When opening the textbook, you have German on the left page and its English translation on the right. 📖

You also given pronunciation, cultural references (language and culture go hand in hand) and the minimum amount of grammar for you to proceed: the communicative approach is the main dish and theory is salt here. 🧂

Every six lessons you have a chapter in which you review the most salient and difficult points. But first and foremost there is exposure to the real language. 🗣️

From the real language rules are inferred, step by step. Perhaps this recipe does not taste good for all of us: there is no doubt, though, that it is the best for me and a fair share of the learners I have met so far. 👍

#1 The best technique to initiate oneself to German

Maria Roemer, Assimil German With Ease’s creator, simplified all that was simplifiable: having said that, you have to invest in your learning, no matter how intuitive is this method. 💪

Anyway, trust me: it’s gorgeous. Assimil has been the first and still rules. They are so far ahead in the implementation of the learning-by-deduction principle.

If you take into account the number of hours you can gain through this method, Assimil German becomes way more cost-effective than any course in any language school, be it Goethe Institut or whatever. 💰

Do the math. If you follow the instructions, there is enough learning for three months: in most schools and most countries, you pay the price of this method only with registration fees and you still haven’t paid for the course itself. 🤨

On top of that, if you add that you can take it and leave it several times, or that you can share it with boyfriends and siblings… what you save is immense. 💰

#3 It is visually appealing

It might seem a superficial argument, but haven’t you ever had to study on squalid photocopies, with layout and imagery so antediluvian that you were put off? Assimil takes care of both the content and its aesthetics. 🎀

This Assimil German is no exception: it makes learning more enjoyable.

They are undoubtedly cool 👍.

Voices belong to Hochdeutsch speakers, which is standard German, inspired by the cultured speech of northern Germany: that of the ZDF news of the Goethe Institut exams, so to speak.

If you are more interested in Austrian or Swiss German, stop right there: the first thing I’d do would be to learn German German, which is, Hochdeutsch; then, eventually, I would include other varieties. 🇨🇭 🇦🇹

Recordings are awesome: the first lessons offer tracks at a reduced speed so that one gets acquainted with the way R, CH and any “weird” (🙃) sound is produced.

As you progress, the speech gets closer and closer to that of real conversations: it’s well done.

If there are details that are not too clear, you need not worry: the method will get back to it at a later stage.

As I told you, every six lessons you have a brief review. Hence, if there are nuances to clarify, don’t insist over and over on the same piece of text: you will be presented that notion again.

Having said that, if once completed the Assimil German With Ease you think you could use a little more practice on that, this workbook could be your thing:

Every so many years, the publishing house refurbishes its materials: it is true that some that are gems end up discontinued. On the other hand, we have to keep up with the times. 📅

Why is it important? A little while ago, I had to study materials on which the cultural notes described the recent creation of ECSC, the European Community of Steel and Carbon.

No comment. I love to browse through old schoolbooks, but mine is, I suppose, more of an unhealthy bookworm syndrome than anything else. 🧐

We want language textbooks to be relevant to our lives and times, which is precisely what Assimil German delivers: smartphones over phone boots, electric cars over steamboats.

I had to make an effort to find something wrong with it: some previous editions used somewhat confusing terminology (verb tenses, for example), something one noticed when comparing Assimil German With Ease with other texts. 📚

Concerning the other issues, the latest edition has swept them all away, although there still are a couple of things I would improve.

#1 The level they promise

Through the With Ease collection, including Assimil German, you should reach a B2. Allegedly. Let’s take a step back.

With a B2, simplifying, you can handle most day-to-day situations and live in Switzerland, Austria, Germany: you can study, work and be a productive member of society. 🌆

Do you achieve this degree of fluency with Assimil German With Ease? No. Nor with any other, in truth. Let me explain.

The best recipe to achieve fluency in a language is to implement a strategy, let’s say, holistic: using various learning approaches, mixing audio and printed materials, watching videos, speaking and writing a lot, getting feedback from a tutor.

You can’t achieve a B2 only through a textbook, no matter how awesomely crafted it is.

In the Assimil catalogue, the With Ease collection (A1 > B2) is followed by the Using one, also called Perfeccionamiento, Perfectionnement or Perfezionamento in other languages (B2 > C1).

Regardless of whether or not C1 is actually achieved (it’s not), this is also a useful piece of language equipment to include in your learning toolbox; unfortunately, it is unavailable in English as a base language. 😒

To go beyond B2, you need to switch to the French or Italian version:

Perfectionnement Allemand and Perfezionamento Del Tedesco: the only chances to keep learning German with Assimil past a B2.

The level of German you can achieve

To put things in perspective, a B2 is the level at which, by custom, one is considered productive in that language in the country where it is spoken. 🥨

In Germany, showing up in the labour market with less than a B1 means being pushed towards low-skilled jobs: cleaning, manufacturing and generally anything that doesn’t involve expressing yourself in German. 👷

To teach in a kindergarten, for example, you should have a B2, although they sometimes bend the rule and allow you to start with a B1, if you commit to reaching B2 within a few months.

The accreditation of any university degree is, however, only granted if you have previously obtained a German C1 qualification. 🎓

Now, if you are not motivated to learn the language, remember that with the paperwork in order, the salary doubles (more than 3.000 €/month gross, in most regions). 🤩

I hope this post has cleared up some of your doubts. I had many, when I started my German learning journey.

Upon completion of this language method and then adding:

I had been able to add German to my CV and using it in my daily job. So, summarizing:

⏩ Assimil German is NOT the only textbook I would recommend to properly learn the language.

⏩ I would not take any official German examination after having merely studied this language method.

Having said that, would I use it again? Absolutely.

I deem it the best language method available to learn German from scratch, in this day and age. If I had to choose one unique textbook for learning the language, Assimil German would be the choice.

Have you ever browsed its pages? Or maybe you have already used it: how did it go?

I’ll get back on German someday. For now though… Bis bald! 🇦🇹