Turbolangs / miscellanea / The Language of Elephants: How the Lovable Giants Talk 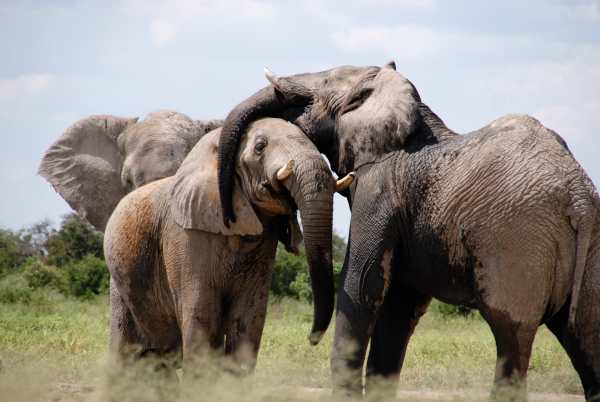 Hey fellow language nerd 🤠 I bring today a topic that does not seem to be a perfect fit with what I do here and that is… the language of elephants. 🐘

In reality, it has a lot to do with TurboLangs: these pachyderms are an endless mine of surprises. Despite the obvious differences with people, they bear a unique resemblance to us.

Understanding elephants better, together with the language they use, is of paramount importance: it enables us to be better stewards of the planet, it sheds light on this four-legged miracle an elephant is and it helps us also to make clear what means to be human. 😻

Why do elephants are similar to us?

Similarities between elephants and humans are jaw-dropping and abundant. An elephant:

And there is a lot more to unpack, but this post goes about the language of elephants, I must leave their superpowers for another occasion. 📅

Groups are lead by a matriarch: in a typical herd, there are only cows and calves. Adult males are on their own.

Once the male calf is a half-grown bull, he leaves his herd of origin to join another composed uniquely of adult bulls, even though they also spend time in solitude.

In the feminine herd, there are ties of kinship; in the masculine, there is a father figure or moral leader who provide guidance to younger animals.

This is no joke: bulls who grew up with no adult bull around tend to become anxious specimens, exhibiting ferocity, lack of sociability, self-harm tendency and when they reproduce they display lousy fatherhood abilities.

If you presume you’re experiencing hallucinations, you are not! I couldn’t believe it either. 🤯

If a calf cries out, all the females in its herd come to aid, and they all participate in the little’s breeding.

When on the move, little elephants are kept in the centre of the herd, within a ring formed by adult cows to protect them: against what? The aggression of various predators, but also from solar radiation by the thick bodies of their mothers, aunts and grandmas, given that the skin of calves is delicate.

The sick and injured are cared for by the group. ❤

Each member of the herd is aware of the hierarchy and the relationships between themselves: old cows accompany the younger ones in their first heat, as they are usually frightened.

Orphaned calves are lovingly raised by the rest of the herd: some cows may even rise to become their stepmothers. Aren’t they extraordinary? By intelligence and level of social articulation, they are nothing short of human. 😃

Indeed, their language seems to be an evolutionary tool developed to manage their hypersociality. But elephants have even more surprises in store: let’s see some.

How can you not fall in love with this wrinkled giant? 🐘😍

And there is still more. For example:

Such an amazingly complex species couldn’t have a less sophisticated means of communication.

They talk to each other in ways that will make you reconsider what is and what is not a language and if this is a primarily human ability.

The Language of Elephants: Elephantese?

Elephants engage in conversations with each other by roaring, grunting, trumpeting; but also by eye contact, by touch, by waving the trunk.

If they touch each other’s trunks while they are crestfallen, everything is under control: they greet each other as beings who recognise and respect each other. If, on the other hand, the trunk is raised, it is an alarm signal: there may be a fight.

A herd of elephants has as much communication dynamics as a human group.

Let’s not let Disney films mislead us: very few animals are so communicative.

And there is more.

For years, gamekeepers and hunters noticed that sometimes elephants would stand still, ears spread and eyes lowered, as if listening, and then regroup with others miles away, or run away somewhere else.

Why and how on earth did they do it? In the past, some have even hypothesized that elephants are telepathic: furthermore, cows in heat can move away from their herd and emit some kind of signal to the bulls in musth.

Musth (a loanword from Hindi) is the period when bulls experience an inordinate increase in reproductive hormones, which makes them aggressive. 💢

The calls of females in heat, as well as more of the elephants’ wide types of communication are inaudible to humans because they are made of…. infrasound.

This is mind-boggling: elephants can communicate through waves with a frequency of less than 20 Hz. 🤯

African elephants produce more than 25 types of sound, 15 of which are infrasound: some mix infrasound with high-pitched sounds and others reach 106 dB. It is an incredible repertoire.

Why do they resort to this type of communication?

The most logical explanation seems to be effectiveness: intensity being equal, low-frequency sounds have a greater range than high-frequency ones. The smaller the amplitude of the wave, the lower the possibility of reflection by surrounding objects (trees, leaves, etc.) and the lower the vibration of the air, thus the lower the heat dissipation of the signal.

Some trumpetings travel for hundreds of metres, but infrasound travels for kilometres: according to scientist Kathy Payne, it can propagate over a radius of 50 square km. 😲 This allows the elephants’ refined social dynamics to be deployed.

Cows and calves live in a group composed of more nuclear families: these ladies are mothers, daughters, sisters, cousins, even grandmothers. These are often lifelong relationships.

Families can separate from the broader clan, in time, even though – and here comes another mind-exploding moment – they keep in touch. Infrasounds come in handy again.

Females emit infrasounds to advertise themselves to males in musth, but also to warn other cows about the presence of bulls. 📢 A mutual help, so to say.

Bulls also use infrasounds to split the territory among themselves and keep an eye around, as bulls in musth avoid each other.

Trumpetings mean excitement: they can signal aggressivity or the pleasure of finding again a member of the herd they have not met in a while. 🤗

Through infrasounds, herds coordinate their movement too: no need to meet up to discuss it face to face, just as we humans would through mobiles. It’s a unique level of complexity, hardly achievable without their language.

Several groups can move on a vast surface, a long distance away from one another, without meeting for a while; but if a group were attacked, through infrasounds they could summon help. 😲

This means: they can roam around on their own so that they would use more efficiently the resources available (the amount of food an elephant needs is… abundant), but in the face of danger, they are sympathetic.

Individuals and groups exchange messages related to location, the proximity of water, vegetation, predators and according to undergoing research… mood and health status. 🩺

The calves learn to recognize their mothers from their first days through their vocalizations: they use different messages for warning, for scolding and for prompting them to get ready to leave. ⚠️ For everything!

There is still a lot to uncover concerning the language of elephants: while there’s consensus around the usage of infrasounds, the way they are received and processed requires further investigation.

For example, the large ears may favour the reception of sound waves. But by now you’ve probably got the idea that elephants never cease to amaze, haven’t you? Well, they also communicate… with their feet. 😲

The language of elephants goes through the ground too

The limbs, full of nerve endings, would receive a range of seismic signals: they are not the only species to do so, in fact, although everything points to them being the only one to do so with this refinement and scope.

Check out this video in English (with subtitles available):

As I said, many things are still to be elucidated: whether the signal from the nails travels to the auditory apparatus via the skeleton, or whether they take advantage of some still unknown virtue of the trunk.

And also about the production of this seismic communication: what percentage of it comes from the legs, or is it the low roars of the pachyderms that generate a seismic echo on the ground? 〰️

One way or another, some scientists suppose that this form of seismic communication can travel up to 150 km away.

If we take a step back, we can better assess the spectacular nature of elephant language:

Uh, so much? Yes! A herd of elephants that has never encountered a human tribe that hunts elephants may anyway know that it is in their interest to avoid it. And how would they find out? They would be warned by another herd that did encounter such hunters.

Why we can consider them semi-human

Due to all the similarities between elephants and humans listed above, some scholars are vocal about extending the notion of human-ness to these fascinating mammals. Their language is one of the strongest proof of that.

Language is not a prerogative of the human species, we knew that; but that of elephants transcends ordinary categories. According to Don Ross, two things would define humanness:

Elephants seem to possess both. 😍 Until recently we have focused our search for such attributes on our closest cousins in the evolutionary line: apes.

Despite being able to learn a very rudimentary sign language, gorillas, bonobos or chimpanzees have not been able to go beyond a handful of words and the elaboration of communication restricted to immediate needs. 🐒

That is the chasm between our language and that of primates: they can’t talk about past events, make recommendations to other peer groups or pass on a social norm from one generation to the next or from one individual to the next. (Some suspect, though, that displaced reference may also exist among primates).

On the other hand, to truly be person, they should demonstrate more qualities: the ability to innovate social customs and to preserve them, for example.

Much remains to be clarified. Among other things, it would be fascinating to decipher the theory of elephant language: its grammar, syntax, phonetics, semantics. 🤓

It is possible that the final message isn’t exclusively vibrational, auditory or tactile, but a cocktail of them. Let’s rely on machine learning and big data: that communication patterns will be identified by analysing large amounts of recordings.

I hope you liked this atypical post: for now, we have no choice but to admire these huge lovable critters, protect and study in order to understand them.

If you think elephant language is cool, but for now you’d rather learn human languages spoken in Africa, check these out:

Basic French: How to Learn it On your Own

Learning European Portuguese: How to Start the Right Way

Learn Amharic: How to Begin the Right Way

A pachydermic hug and thank you for reading this rant 😉